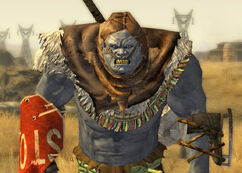 “They are very good Wind-Brahmin -- all caps.”— Nightkin

The nightkin trying to sell you the "wind-brahmin" may not show up, but in an entirely different location (i.e. the Strip) and try to sell it to you. He can show up in any area of the game world later on, including DLC-only areas. When he appears to you outside of Brooks tumbleweed ranch, there is a good likelihood that he will be hostile to non-player characters around him and club them to death before initiating his odd dialogue with the Courier. If you load the game, it seems that he may not appear again, which means you will probably have to deal with him elsewhere. [verified]