Wilson Automatoys, also known as Wilson Atomatoys, was a pre-War company, creator of the Giddyup Buttercup.[1]

The company was founded in 2042 by George Wilson and Arlen Glass.[2][3] The Giddyup Buttercup was popular and resulted in hundreds of millions of dollars in revenue per year at $16,000 per unit.[4] When projections indicated a 17% drop in sales for the fourth quarter of 2077, both founders sacrificed time with their families in order to dedicate more effort to improving projections.[4][5]

Instead of a focus on existing products, the new president placed a bid to participate in the SCYTHE Program, an initiative to repurpose civilian manufacturing infrastructure for the covert production of munitions.[9] The bid was approved on September 1, 2077, with instructions to immediately begin the production of land mines.[10]

Without apprising Arlen, the factory's assembly lines were converted to facilitate the shift in production, scheduled to begin November 1.[11] Marc introduced the SCYTHE plans in full during a board meeting, which were opposed by Arlen.[12] The conflict that followed resulted in Arlen's removal from the premises by security and subsequent termination.[13][14] In response, Arlen attempted to appeal to Marc to reconsider participation in the project.[15] The news of his dismissal was a shock to the remaining employees of the company.[16]

Wilson Atomatoys is mentioned in Fallout 3 and Fallout 4. 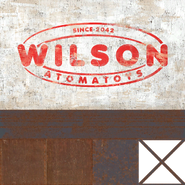