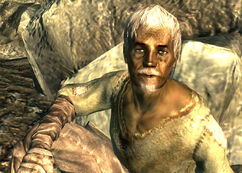 “Just leave me to die in peace.”

Willy is a water beggar outside of Tenpenny Tower in 2277.

Driven half-mad by lack of sustenance, and half-blind with hatred over his treatment by the snooty inhabitants of Tenpenny Tower, Willy still remains close to the structure, in the vain hope that a water caravan or kindly stranger will cross his path.[1]

Willy will accept purified water and Aqua Pura. If the Lone Wanderer tells him to get his own water, he will have died by the time he is found.

Regardless of how much water given, Willy will continue to ask for more. He will not accept dirty water, as he can't handle irradiated water any longer. If he is given Aqua Pura, he will die despite it being clean.

Willy appears only in Fallout 3.

Retrieved from "https://fallout.fandom.com/wiki/Willy_(Fallout_3)?oldid=3188713"
Community content is available under CC-BY-SA unless otherwise noted.