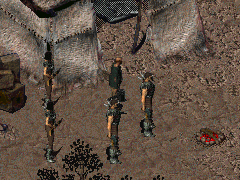 A trader and guards

“Greetings friend, my name is Willy and have I got a deal for you.”

Willy is a special weapons trader around Modoc in 2241. He appears in the special encounter A trader and guards.

Willy is a strange weapons dealer in the wasteland. Upon first meeting a customer, he will read an extremely long and boring speech from a card (presenting and saying he has a deal for the customer in the introduction), lulling the customer to sleep. After waking, the customer must choose whether or not to buy whichever weapon he is selling, but unsure of what the actual weapon may be. After the first encounter, Willy will then describe the weapons, but still never reveals the weapons to his customers. Among the weapons he sells is the rare alien blaster. To check what he has, click barter during dialogue. It should reveal that he has 10 caps and the weapon he is offering.

Willy appears only in Fallout 2.

Retrieved from "https://fallout.fandom.com/wiki/Willy_(Fallout_2)?oldid=3130107"
Community content is available under CC-BY-SA unless otherwise noted.