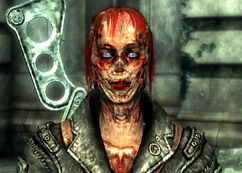 The Mall, close to Museum of History's entrance

“Those other assholes.”— To the Lone Wanderer

Willow is a ghoul, the self-proclaimed sentry of the Underworld in the year 2277.

A nonchalant but friendly young ghoul, Willow is sarcastic, but happy to speak with The Wanderer. She serves as a forward observer for the ghouls living in the depths of the Museum of History. She isn't bothered by the super mutants (because they don't tend to attack ghouls), but she's got some particular vehemence for the Brotherhood and Talon Company humans.[1]

She can usually be found on the Mall, wandering around just outside the entrance to the Museum of History.

Willow appears only in Fallout 3.

Retrieved from "https://fallout.fandom.com/wiki/Willow?oldid=3131129"
Community content is available under CC-BY-SA unless otherwise noted.