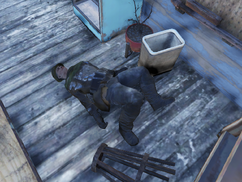 Willie Mae is a deceased survivor of the Great War found in Flatwoods in Appalachia in 2102. Her body can be found on the porch of a house across the road from the Green Country Lodge near a working radio.

Prior to the Great War, Willie Mae was a resident of Flatwoods. After retiring, she had planned to simply watch her programs and entertain her grandchildren, but Great War changed all of that. Just before the War, there was news of tremors in the mines where her husband Frank worked, and he never came home. After the War, Willie Mae spent her time listening to music and reading old newspaper articles. A month prior to the War, Willie Mae has managed to win the Watoga Times Atomic Lottery after 20 years of participation, netting herself a ten-year supply of Blamco Mac and Cheese, Salisbury Steak and Nuka-Cola. However, this supply only lasted eight years and she sought out the Responders for aid after hearing their radio broadcasts.[1]

Willie Mae appears only in Fallout 76.

Willie's house in Flatwoods
Add an image to this gallery

Retrieved from "https://fallout.fandom.com/wiki/Willie_Mae?oldid=3220961"
Community content is available under CC-BY-SA unless otherwise noted.