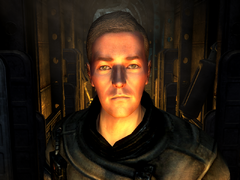 Williams without his hat

“There's a full complement of guards in the next room. As soon as I get them you're going back in your cell. In a body bag, if necessary.”

Lieutenant Williams is an Enclave officer stationed at Raven Rock in 2277.

Williams is one of the only Enclave officers present at Raven Rock. He patrols the cell blocks in section 3A of the base. He may be ordered by President Eden to report to his commanding officer for reassignment, but he remains at his post for the duration of the Lone Wanderer's exploration.

Lieutenant Williams appears only in Fallout 3.