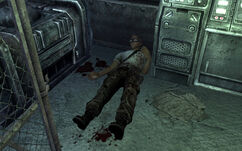 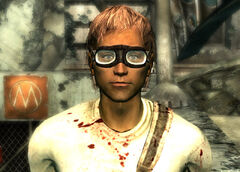 “If those things get too close, I'll blast the antennae right off their ugly heads.”— Brandice's terminal

William Brandice was an Enclave deserter whose corpse is found in the Marigold station in 2277.

William was the husband of Sheila and the father of Will and Frank Brandice. Originally from Navarro, Brandice deserted from the Enclave for unknown reasons. He journeyed across the continent and settled in the town of Grayditch, as a doctor. Believing the Enclave was closing in on him, Brandice took to the underground but wasn't ready for quite so many fire ants. A one-time friend of Fred Wilks, Brandice is said to have a small weapons cache saved from his transcontinental trek.[1]

Those!: Brandice is found dead in the ant tunnels.

William Brandice appears only in Fallout 3.

William Brandice without his goggles
Add an image to this gallery

Retrieved from "https://fallout.fandom.com/wiki/William_Brandice?oldid=3202082"
Community content is available under CC-BY-SA unless otherwise noted.