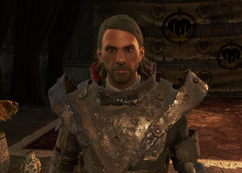 William Black is the second-in-command of the Operators, a raider gang in Nuka-World in 2287.

William Black is a high-ranking member of the Operators, brother and second-in-command to his sister Mags Black. Just like her, he is part of a prestigious upper-stands family in Diamond City that was disowned and exiled in the wake of an unspecified incident that led to a young woman's death, as well as a long list of other illegal activities. The siblings eventually established the Operators raider gang and set up shop in Nuka-World's former theater, the Parlor, with the sole intent of making as many caps as humanly possible.

William usually leaves running the gang to his sister Mags and prefers to stay in the background, only stepping up when she is occupied elsewhere. He, therefore, does not hand out quests, although he occasionally chimes in when the Sole Survivor is talking to his sister. Just like the majority of the Operators, he boasts an unusually calm and well-spoken demeanor for a veteran raider, but he should not be underestimated regardless as he is the most heavily armored member of his outfit and will put up quite a fight if need be.

During the day, William can usually be found near the stage of the Parlor, engaging in idle activities. At night he retires to his and Mags' personal quarters to the right of the stage.

Should the player character have seriously disadvantaged the Operators in terms of assigned Nuka-World sectors and raider settlements, he and Mags will betray the Sole Survivor during the quest Power Play, forcing a fight to the death at the Nuka-World power plant.

He also needs to be killed if one chooses to rid Nuka-World of the raider gangs during the quest Open Season.

William Black appears only in the Fallout 4 add-on Nuka-World.

Retrieved from "https://fallout.fandom.com/wiki/William_Black?oldid=3290048"
Community content is available under CC-BY-SA unless otherwise noted.