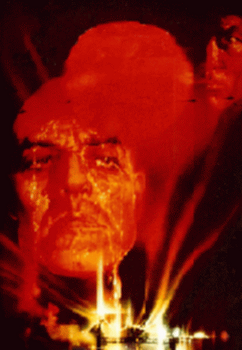 Days turned into months, and the months turned into a year. After a year of not hearing anything, the remaining ghouls at the Reservation started to give up hope that any of the original twelve would ever come back. But one did. Dr. Willem Clark not only came back, but he came back with two, possibly three dozen ghouls in tow. When he settled back into the Reservation, he told the others about the prejudice and mistreatment ghouls faced at the hands of smooth skin humans. He then explained to the survivors at the Reservation that they were given a gift - the gift of life and the ability to adapt to this new, Promised Earth. It became clear to Willem that becoming a ghoul was an evolutionary process in which the ghoul body could withstand, and in fact even prosper, in this scorched, radioactive Earth. He declared that he would guide his fellow ghouls into the next age of man - the age of ghouls. The Children of the Wastes would inherit the Promised Earth, and Dr. Willem Clark would guide them the entire way, protecting them from the cruelty of the smooth skins, but training them for their eventual uprising against their oppressors.

Willem reveled in his little empire, and his ghouls began to look upon Willem as their lord and savior. They worshiped him in such a way as to deify him. Soon, Willem eventually began to think of himself as a deity and became more reclusive over the last fifty or so years. He finally came to a point where he never left his room on Sub-Level 3 and only communicated to his fellow ghouls through computer screens placed throughout the facility. When he communicated, he would only reveal his mouth over the screen, for he felt should any of his followers look into his eyes, they would burn under his magnificence - such was his ego. When one did get the chance to speak with Willem, he would often refer to himself in the third person and put his sentences together in such a way as to sound like he was reciting scripture. Due to his high intelligence, no one was able to convince him otherwise of being a holy savior, and nobody probably could. He would continue to lead his people to the Promised Earth until his dying day, but no one knows when that will be, if ever.[1] 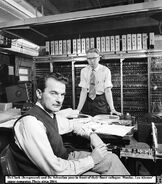 Dr. Clark (foreground) and Dr. Sebastian pose in front of their finest colleague; Maniac, Los Alamos' super computer. Photo circa 2064
Add a photo to this gallery

Retrieved from "https://fallout.fandom.com/wiki/Willem_Clark?oldid=3463495"
Community content is available under CC-BY-SA unless otherwise noted.