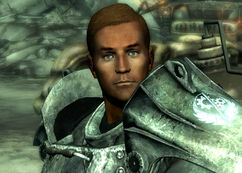 “This is the last free radio station in the entire D.C. area. The rest of the airwaves are clouded up with Enclave propaganda. I wouldn't believe a word they say anywhere else.”

Knight Sergeant Wilks is a Brotherhood of Steel soldier stationed in the GNR building plaza in 2277.

Wilks is part of the Brotherhood of Steel security detail stationed at the Galaxy News Radio station, operated by Three Dog. In exchange for permission from the radio DJ to use the GNR building as an outpost to counter the super mutant army operating in downtown DC, the Brotherhood squad was tasked to provide security for the radio station. Although haughty, the GNR security detail allows aid from outsiders.

Retrieved from "https://fallout.fandom.com/wiki/Wilks_(Brotherhood_of_Steel)?oldid=3125411"
Community content is available under CC-BY-SA unless otherwise noted.