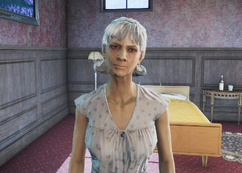 Wilhelmina Cabot is the mother of Jack Cabot and Emogene Cabot and wife to Lorenzo Cabot living in the Cabot House in 2287.

Wilhelmina is a member of the seemingly immortal Cabot family. It is unknown when she was born, only that it was at least 200 years before the Great War.

After the completion of the Secret of the Cabot house and siding with Jack, Wilhelmina dies. It is implied that either she died of natural causes or killed herself upon learning of Lorenzo's death.

Wilhelmina Cabot appears only in Fallout 4.

Lorenzo and Wilhelma portrait in Cabot House
Add an image to this gallery
Retrieved from "https://fallout.fandom.com/wiki/Wilhelmina_Cabot?oldid=3123063"
Community content is available under CC-BY-SA unless otherwise noted.