Fallout 3
“If you want in, ride out with the next ambush. Stash the water when it's done, the regulars will show you where, and then get up to Grandma Sparkle's. Grandma loves visitors and keeps her mouth shut. That and she cooks a mean stew. So that's where we meet.”— Split Jack, New meeting place

Wilhelm's Wharf, also known as Captain Paglia Dockside Bar & Grill, is a small wharf with a shack situated on the banks of the Potomac River in the Capital Wasteland in 2277, southeast from the Super-Duper Mart. Its only inhabitant is Grandma Sparkle. The docks are also the headquarters of Split Jack's gang who are attacking the water caravans along the roads near Rivet City after Broken Steel is installed.

Wilhelm's Wharf was a small settlement located near the Potomac River in the Washington, D.C. area. The old woman Grandma Sparkle resides in the area and acts as a local trader. Her two sons hunt for mirelurk meat along the river.

The shack hugs the bulge of the Potomac River with access to the bitumen road to the southwest. Four tables and eight chairs remain intact in the yard. Inside the shack itself is a cabinet with a random assortment of loot.

An outhouse is at the end of a brick pavement along the Potomac; behind the outhouse lies a drainage culvert with a damaged sewer grate that leads to the Hubris Comics utility tunnels. A sunken boat with some aid items and ammunition can be found in the water nearby.

Wilhelm's Wharf appears only in Fallout 3. 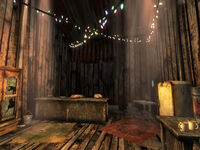