Wild blackberry is a consumable in Fallout 76.

Wild blackberries are dark purple fruits that grow on bushes. They can be used to make several consumable items with the relevant recipes.

When affected by a blast zone, wild blackberries mutate into radberries and yield raw yellowcake flux when harvested.

In a removed Vault 94 greenhouse terminal entry, the blackberry is referred to as Rubus allegheniensis, the real world common blackberry.[1] 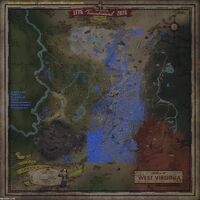