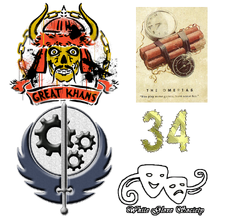 “Oh no, I didn't mean that! Who needs their support? The Securitrons will be all the support you need! What I meant is, you should get to know these tribes and decide which ones you like and which you don't!”— Yes Man

Wild Card: Side Bets is a main quest in Fallout: New Vegas, given by Yes Man.

In order to gain support for an Independent Vegas and efforts at the Second Battle of Hoover Dam, the Courier must make contact with the various tribes of the Mojave.

The factions you need to talk to are:

Each of these factions can be met in any order, and all have a quest associated with them. Upon successfully completing the associated quest, one will have the option to tell Yes Man what they have done. Alternatively, one can simply tell Yes Man to ignore the faction, thereby skipping the need to deal with them. Even if one has told Yes Man to ignore a faction, the player character can go back once you've earned their assistance and change your opinion of them through dialogue.

Essentially this quest is just a guidepost quest that points the player character to the other factions, actually earning their aid or solving their problems requires the completion of their side-quests, which usually rewards the Courier with reputation (reputation with the Strip for the casinos, or with the Boomers, Brotherhood, or Khans) and sometimes special benefits.

Hidden Valley is a fenced in area that has an odd phenomenon during the night, dust storms concealing its bunkers. A few underground bunkers are scattered around the area. The Brotherhood bunker is on the west side of Hidden Valley toward the north end, and will be indicated by a tree stump on it. Upon entering the correct bunker, the Courier will be interrupted by two Brotherhood paladins. They will ask the Courier to strip down to their underwear, wear an explosive collar, and to enter and meet their leader if one wants to side with them (this section of the quest will not occur if the player character has Veronica Santangelo as a companion).

Although the Brotherhood of Steel will not side with the Courier and Yes Man, one has three solutions:

To solve the Boomers' problems, the quest Volare! must be completed. This will earn their assistance in the Battle of Hoover Dam (by way of a pre-War heavy bomber) and the ability to come and go freely from Nellis. Thump-Thump, a unique grenade rifle, and ample 25mm grenade ammunition and all types of grenades can be found in the Ant Misbehavin' side quest at Nellis AFB. If one wishes to pick up the rebreather, they can acquire it from Jack and Loyal after earning Pearl's trust.

The Great Khans can either be convinced to help (by completing the quest Oh My Papa,) or to leave the Mojave for more fruitful areas. They can also be exterminated completely, or ignored. It is also possible to get the Khans to attack Hoover Dam on their own during the final battle through a Speech check (75) with Papa Khan after the Courier has gotten him to break the alliance with Caesar's Legion by telling him that the Great Khans have no legacy.

If the Courier does not speak to Papa Khan before killing him, they will not be able to complete the quest part with Yes Man.

By dealing with the White Glove Society's problems with cannibalism during the quest Beyond the Beef, one can tell Yes Man that they fixed their problem, solving their portion of the quest.

At the Gomorrah, one can pick up the quest How Little We Know. If the Courier chooses to aid Cachino in breaking up what the bosses have planned, then they can inform Yes Man of this fact. If one elects to help the bosses in their plan to attack the Strip, they can also tell Yes Man of this, completing that portion of Wild Card: Side Bets. Be aware that this will lower one's reputation with The Strip.

Once all the factions have either been ignored, wiped out or their side-quests completed, the Courier must simply talk to Yes Man again to complete the quest.

This quest is probably the longest in the game, simply for the fact it has five components, each of which is a quest chain with between 2 and 7 parts.

The Courier has the option of telling Yes Man to ignore the factions. Minimum things that must be done are:

Completing both this quest and Wild Card: Change in Management is considered a point of no return. Completing the latter fails The House Has Gone Bust!, closing the Mr. House quest line, while completing both fails both Don't Tread on the Bear! and Beware the Wrath of Caesar!, closing the NCR and Legion quest lines, respectively. From this point forward, the only ending possible is No Gods, No Masters (the Independent ending).

Retrieved from "https://fallout.fandom.com/wiki/Wild_Card:_Side_Bets?oldid=3484494"
Community content is available under CC-BY-SA unless otherwise noted.