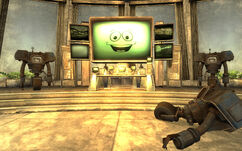 Time for some changes

“Wow, Mr. House had quite a set-up here! I can access his databanks and view telemetry on every Securitron on the network!”— Yes Man

Wild Card: Change in Management is a main quest in Fallout: New Vegas.

If the Courier is going to establish an Independent Vegas with the help of Yes Man, some people will need to be fired, namely CEO Robert House.

This series of quests leads to one of many Fallout: New Vegas endings. Once the Courier discovers Yes Man, he will explain Benny's plan to kill Mr. House and take over New Vegas. The player character will then be able to choose either to continue with Benny's plans or take on this quest, killing Benny. The Courier will have to head towards the Lucky 38 penthouse, locate the chamber in which Mr. House actually resides, and either choose to disable him or kill him. If one chooses to kill Mr. House, meet Yes Man at The Tops casino and accompany him to Lucky 38.

After entering the Lucky 38 penthouse, find a terminal on the wall near Mr. House. This terminal will allow one to unlock a hidden door (named the antechamber) leading to Mr. House's chamber. Unlocking the terminal requires either:

After activating the door, an alarm will sound and the securitrons will become hostile. Behind the hidden door are two more terminals. The terminal on the right in the back allows a "Security Override" to be performed which will stop any remaining securitrons from attacking on sight. The second terminal, on the left near the elevator, is used to unlock the elevator. Activate this to head on to the control room.

Once in the control room, there is one final terminal. Activate it to release Mr. House's isolation chamber and expose him to the outside world. The player character can then talk to him, and he will tell them how your "Vanity Project is doomed to fail." His fate can be decided by going back to the terminal and choosing to either kill him (also possible via the "sterilize chamber" option) or leave him helpless, both of which result in loss of Karma. Note that once the isolation chamber has been opened, regardless of the fate you decide for Mr. House, he will die within a year from exposure to outside contaminants. Alternatively, after the player character has opened the chamber, they can attack him.

To pass the initial terminal, one can choose to either pass a Hard difficulty hack or execute an executive override and obtain the password to the terminal from either H&H Tools Factory or the hotel in Camp Golf.

If the Courier decides to kill Mr. House, they will receive the note A tragedy has befallen all mankind, and the quest The House Has Gone Bust! will instantly be started and failed.

Once the Courier has killed Mr. House, it is time to meet Yes Man. Return to Benny's suite at the Tops - he's in the room beyond his bed. Talk to him and he'll agree to meet the player character at the Lucky 38.

Sometimes, Yes Man disappears after you kill Benny, if the Courier leaves Benny's apartment and returns later. He can be found standing outside of The Tops casino. He can be told to meet up at the Lucky 38 without incurring any faction penalties. Once the player character meets him in the Penthouse of the Lucky 38, where House's avatar formerly spoke to Courier the first time, the installation of Yes Man is triggered. This triggers two quests: Beware the Wrath of Caesar! and Don't Tread on the Bear!. This puts the player character on notice that working with Yes Man further will cause the player character to be unable to work with those factions

After installing him on the Lucky 38 mainframe, he will make the demonstration about the Securitron upgrades at the Lucky 38 basement.

One can let Yes Man wait for them at the Lucky 38 until the player character finishes most of the other quests with the NCR and Caesar's Legion and are ready to proceed.

Retrieved from "https://fallout.fandom.com/wiki/Wild_Card:_Change_in_Management?oldid=3197442"
Community content is available under CC-BY-SA unless otherwise noted.