Wild Card: Ace in the Hole 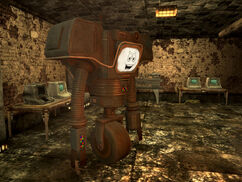 Yes Man is the ticket to New Vegas

“Again, goal number one is to eliminate Mr. House and install my neuro-computational matrix on the Lucky 38's mainframe! Given how you're a new arrival, I also recommend that you get to know some of the region's tribes, so you can decide how you feel about them! By the time you've finished up all of that, the Legion should be close to attacking Hoover Dam and we'll execute the last phase of the plan!”— Yes Man

Wild Card: Ace in the Hole is a main quest in Fallout: New Vegas.

The Courier is interested in running the New Vegas Strip themselves and an oddly helpful Securitron can help them achieve that.

The passive route is to follow the responses leading to Benny giving the player character the suite key and asking them to go up and wait in the room.

With a successful Speech check, the Courier can get him to lead them to the penthouse, which gives the option of killing him without his guards. The player character will then receive the Wild Card: Ace in the Hole quest, and can proceed to his personal suite, to meet Yes Man.

The other route is to directly attack him. He yells for help from his four bodyguards. Two of the guards will be carrying silenced submachine guns, the other two carry silenced .22 pistols and Benny is using Maria, a unique 9mm pistol.

If the Courier is female and has the Black Widow perk, they can convince Benny to have sex with them in his suite. Upon finishing, the Courier will have the option of murdering him in his sleep.

If the player character chooses the passive route, without Benny leading them, go straight up to the presidential suite. Once in the room, check around for clues, grab whatever items one needs and return to the door, where Benny will be on the intercom. With a high Speech skill, the player character can persuade him to give more information. Otherwise, the Courier will end up having to threaten him, then his guards will show up and attack.

Find the safe behind the counter and loot it. Once this is done, Yes Man should confront the Courier; talk to him to activate another quest.

The phrase "ace in the hole" is used to describe something that can supply a sure victory when revealed. An old American slang (dating from before 1920s), it may have originated from five-card stud poker, in which one of the card in each player's hand is kept face down (in the hole) from being viewed by other players until showdown, thus not reviewing the strength of the hand until the end.

Retrieved from "https://fallout.fandom.com/wiki/Wild_Card:_Ace_in_the_Hole?oldid=3199193"
Community content is available under CC-BY-SA unless otherwise noted.