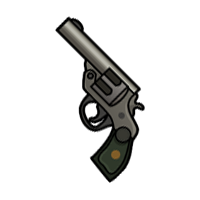 “When someone says "draw," you say, "die."”— In-game description

Wild Bill's Sidearm is a weapon in Fallout Shelter.

This Smith & Wesson .32 pistol looks like all the other variants of the .32s but has slightly higher damage potential than the highest non-legendary .32 pistols.

Wild Bill's Sidearm is a hinged frame top-break revolver featured in Fallout Shelter. Dealing as little as 1 damage per attack, it has the lowest minimum damage output for handguns in the game and is one of the weakest legendary weapons in the game. It deals up to four more points of damage than the .32 pistol.

A high Agility statistic is needed to effectively create the Wild Bill's Sidearm.

Add an image to this gallery
Retrieved from "https://fallout.fandom.com/wiki/Wild_Bill%27s_Sidearm_(Fallout_Shelter)?oldid=3329502"
Community content is available under CC-BY-SA unless otherwise noted.