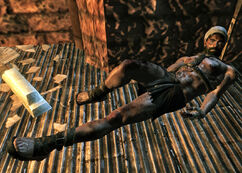 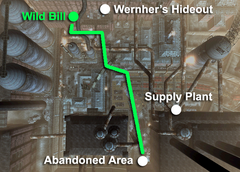 Location of Wild Bill in the steelyard

Wild Bill's Last Stand is an unmarked quest in the Fallout 3 add-on The Pitt.

Milly, a slave in The Pitt's Downtown, is worried about Wild Bill who has been missing since going on an steel ingot expedition to the steelyard. She asks the Lone Wanderer to look for him.

Wild Bill's body is found on a flight of stairs in the steelyard. He carries Wild Bill's Sidearm (a unique .32 pistol), and a note explaining his fate. Next to him are several steel ingots.

Once you return to Milly, you have several options. If you tell Milly that Bill is dead, or lie and say he is alive, she will hand over six stimpaks. If you complete a Speech check, you can convince her that you saw and heard him being torn apart by the trogs, so you had to put him out of his misery, and Milly reacts to this news by fainting. She drops the stimpaks as she would have given you upon fainting. However, it is likely for the ragdoll to spin around, flinging the stimpaks out of sight, so saving beforehand is advisable.