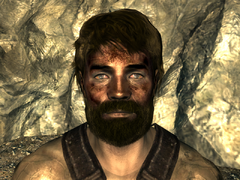 Wild Bill is a dead slave found in the the Pitt's steelyard in 2277.

A Pitt slave who has impressive skill with .32 pistol, Bill volunteered for the job of steel ingot collector after the previous Pitt slave failed to return. He knew the odds of returning were not favorable but could not see his friends die when he, at least, had a fighting chance.[1]

According to the note found on his corpse, the trogs were easily dispatched and the steel was easily gathered, but the wildmen finally put him to rest.

Wild Bill developed a keen relationship with a fellow slave Milly, as their time in the mill together was some sort of bonding experience.

Wild Bill appears only in The Pitt add-on for Fallout 3.