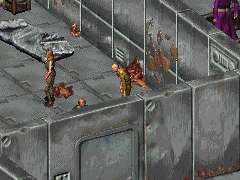 “You see what seems to be a complete loser.”— In-game description

Wiggum is one of the four psykers, along with Gideon, Lucy, and Moore, that are being kept behind a forcefield in the Master's Lair beneath the Cathedral in 2161.

Wiggum is one of the Master's failed experiments in trying to awaken psychic powers in humans. Wiggum, while seemingly not as insane as other psykers, is quite clearly depressive. Described as a complete loser, he is wearing a psychic nullifier.

Wiggum is an electrokinetic-dominant psyker.[1] These powers are suppressed when Wiggum is fitted with a psychic nullifier, but smalls sparks of energy still eminate from and over his body.[2]

Wiggum appears only in Fallout and is mentioned in the Fallout Bible.

Retrieved from "https://fallout.fandom.com/wiki/Wiggum?oldid=3338059"
Community content is available under CC-BY-SA unless otherwise noted.