The wig is a piece of headwear in the Fallout 3 add-on Broken Steel.

The wig is a full head of fake brown hair.

The idea of a ghoul wearing wig is most likely a reference to the ghoulish aliens in the John Carpenter movie, They Live. Many of the "ghouls," as they are credited, have false hair very similar to this, as well as faces that are reminiscent of the Fallout ghouls. 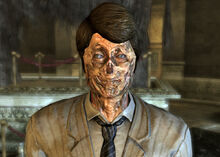 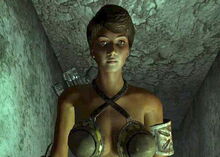 The wig on a woman
Add a photo to this gallery
Retrieved from "https://fallout.fandom.com/wiki/Wig?oldid=3448280"
Community content is available under CC-BY-SA unless otherwise noted.