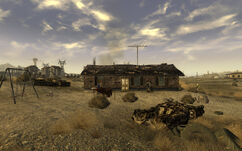 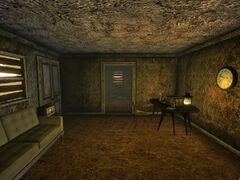 “I'm taking most of the boys west to go check out this Vault we heard about. Stay here and keep an eye on things until we get back, and keep a closer eye on the Fiends - those guys are crazier than Scrambler. If there's any trouble, radio ahead.”— Samuel Cooke

The Whittaker farmstead is a location in the Mojave Wasteland. It is situated on the northern side of Nevada State Route 159, southwest of the Allied Technologies offices.

The small farmstead has recently been taken over by a group of Powder Gangers.

The front door has an Easy level lock. A ham radio is inside, along with four to five Powder Gangers using the farmstead as their hideout. Two graves are located west of the farm. The farm can be used as player housing.

The Whittaker farmstead appears only in Fallout: New Vegas.

Ranger holodisk
Add a photo to this gallery
Retrieved from "https://fallout.fandom.com/wiki/Whittaker_farmstead?oldid=3401372"
Community content is available under CC-BY-SA unless otherwise noted.