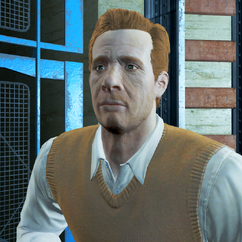 “We'll be fine... Just as soon as the world stops spinning...”— Mr. Whitfield while entering Vault 111

Mr. Whitfield is a pre-War resident of Sanctuary Hills in 2077.

Mr. Whitfield, along with his wife, was one of the citizens of Sanctuary Hills to be elected as a resident in Vault 111. He made it in time to enter the vault before the nuclear bomb exploded. He died of asphyxiation within the cryo-chamber, pod B5 (C11 floor paint), when life support to the cryo pods was switched off, during the Institute's kidnapping of Shaun in 2227.[1]

Whitfield appears only in Fallout 4.

Retrieved from "https://fallout.fandom.com/wiki/Whitfield_(male)?oldid=3290246"
Community content is available under CC-BY-SA unless otherwise noted.