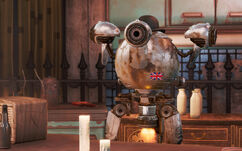 The Third Rail in Goodneighbor

Emogene Takes a Lover
The Silver Shroud
The Cleaner

Whitechapel Charlie is a unique Mister Handy and the bartender of The Third Rail in 2287.

The barkeep of The Third Rail, Whitechapel Charlie can be distinguished by the fact that he sports a few elements of pre-War United Kingdom. He is programmed to boast an alternative Cockney accent alongside wearing a bowler and having the former flag of the country, the Union Jack, stamped on his chassis. Under the employment of John Hancock, who owns the bar, Charlie hired a singer, Magnolia, to perform at the Third Rail.

Whitechapel Charlie has unique interactions with companions if the player character brings them along to the Third Rail.

Whitechapel Charlie appears only in Fallout 4.

Retrieved from "https://fallout.fandom.com/wiki/Whitechapel_Charlie?oldid=3176528"
Community content is available under CC-BY-SA unless otherwise noted.