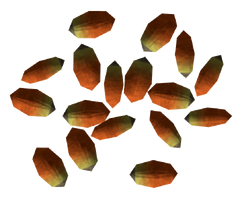 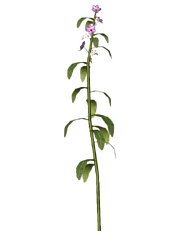 White horsenettle is a consumable item in Fallout: New Vegas.

Capable of growing up to three feet in height, and sporting both nettles and berries, white horsenettle is a flowering plant capable of growing in semi-arid climates with poor soil. As such, it is commonly found in the South and the Southwestern United States. Unchanged by the environmental conditions that followed the Great War, the white horsenettle growing in the Mojave Wasteland has exhibited few morphological changes in the past two hundred years. Along with the common potato and various species of datura, white horsenettle is considered to be part of the Solanaceae family of plants.

As with many other plants that share its taxonomic grouping, white horsenettle produces a glycoalkaloid compound known as solanine, which is highly toxic to many animals. Absorption of solanine in humans may cause symptoms indicative of severe gastrointestinal and neurological poisoning, including nausea, hallucinations, diarrhea, vomiting, and cardiac dysrhythmia. If left unchecked, this potentially leads to paralysis and death. Most cases of solanine poisoning are brought about by the ingestion of plant material. Direct delivery into the bloodstream is possible, although such an occurrence is highly unlikely under normal circumstances.

Nevertheless, the berries produced by the white horsenettle plant have been used by indigenous tribes for food preparation, medicine, and tanning. Like all other plants in the Mojave Wasteland, white horsenettle berries will eventually regrow after being picked.

White horsenettle berries are an ingredient in many poisons, including Mother Darkness, tremble, Silver Sting and bleak venom. In addition, they can also be used for turning the pelts of various gecko subspecies into tanned gecko hide, tanned fire gecko hide, tanned green gecko hide or tanned golden gecko hide. Although edible, white horsenettle is poisonous and will inflict a significant penalty to Endurance and Agility, offset by a pitifully weak healing effect and minimal appetite reduction. Thus, they are best employed for crafting purposes. With Lonesome Road, white horsenettle can be used to create fiery purgative, which purges the body of toxins.

Horsenettle tends to grow near civilized areas, although they can also be found in isolated areas, albeit less frequently. In general, underneath water towers, water tanks, pipelines, and power lines are good places to look.

Retrieved from "https://fallout.fandom.com/wiki/White_horsenettle?oldid=3316918"
Community content is available under CC-BY-SA unless otherwise noted.