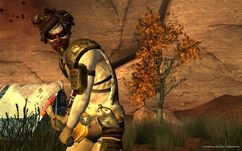 This section is transcluded from White Legs. To change it, please edit the transcluded page.

The White Legs are composed overwhelmingly of very light-skinned individuals of Caucasian descent, and tribe members cover their bodies in a chalk-like white powder as war paint. They have a unique dreadlocked hair style, as well as white-and-red war paint covering their faces. The dreadlock style of hair originates from the White Legs worship of Ulysses, who taught them most of their combat skills amongst other things.

The White Legs use a variety of weapons; mainly simple, home-made melee weapons such as mantis gauntlets, Shishkebabs, tomahawks, and fire bombs, but have recently taken to using "storm drums" raided from an armory near Spanish Fork. They can also be found with very high-end weapons such as grenade launchers, brush guns, riot shotguns, anti-materiel rifles, 12.7mm submachine guns, and .45 Auto submachine guns at higher levels. They are often accompanied by Legion mongrels.

Retrieved from "https://fallout.fandom.com/wiki/White_Legs_tribal?oldid=3440577"
Community content is available under CC-BY-SA unless otherwise noted.