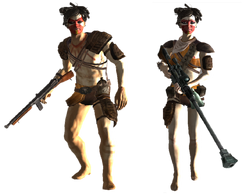 White Legs storm-drummers are White Legs tribals living in the Zion Canyon in 2281.

One of four different classes of White Legs, these warriors specialize in firearms, and are often equipped with .45 Auto submachine guns (their tribe's so-called "storm drums") or 12.7mm submachine guns. Some are instead equipped with a random two-handed rifle, ranging (depending on level) from the varmint rifle to the anti-materiel rifle as well as sometimes a brush gun. They carry a random melee weapon as well as several throwing tomahawks as backup weapons.

Retrieved from "https://fallout.fandom.com/wiki/White_Legs_storm-drummer?oldid=3362374"
Community content is available under CC-BY-SA unless otherwise noted.