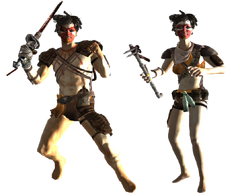 White Legs pain-makers are White Legs tribals living in the Zion Canyon in 2281.

One of four different classes of White Legs, these warriors specialize in melee weapons, carrying a cleaver, hatchet, machete, or fire axe (depending on level), as well as a Shishkebab at high levels.

Additionally, all their weapons other than the Shishkebab are poisoned. They carry several throwing tomahawks as a backup weapon. Pain-makers are slightly shorter than normal non-player characters.

Retrieved from "https://fallout.fandom.com/wiki/White_Legs_pain-maker?oldid=3242778"
Community content is available under CC-BY-SA unless otherwise noted.