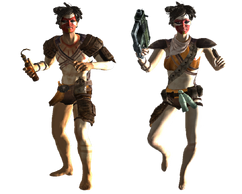 White legs light-bringers are White Legs tribals living in the Zion Canyon in 2281.

One of four different classes of White Legs, these warriors specialize in explosives, and often come equipped with fire bombs. They sometimes randomly carry frag grenades, plasma grenades, or dynamite. They also carry a random pistol or submachine gun as a backup weapon. At high levels they usually use 12.7mm submachine guns.

Retrieved from "https://fallout.fandom.com/wiki/White_Legs_light-bringer?oldid=3107763"
Community content is available under CC-BY-SA unless otherwise noted.