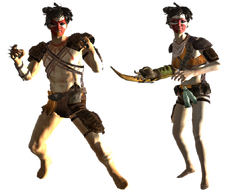 White Legs bone-breakers are White Legs tribals living in the Zion Canyon in 2281.

One of four different classes of White Legs, these warriors specialize in unarmed combat, and are equipped with a random unarmed weapon. At higher levels they are often equipped with mantis gauntlets, or bladed gauntlets which also may be poisoned.

Bone-Breakers are slightly taller than most normal human non-player characters, and have an innate +3 bonus to DT.

Retrieved from "https://fallout.fandom.com/wiki/White_Legs_bone-breaker?oldid=3445339"
Community content is available under CC-BY-SA unless otherwise noted.