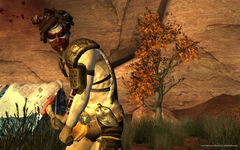 “They're hateful savages who live only to plunder and destroy. Their leader is a devil called Salt-Upon-Wounds.”— Daniel

Descended from the survivors of the Great War from the desolate region around Salt Lake City, the White Legs are a tribe formed out of a broad cross-section of Americans of different ethnic backgrounds, including Native American and various European ethnicities, from pre-War tourists trapped in post-nuclear North America. Having emerged in the desolate environment of the Great Salt Lake, the White Legs have traditionally painted themselves white to blend into their homeland,[2] and have learned to survive as master scavengers. What they cannot obtain by salvaging, they obtain by raiding other tribes and communities. As a result, they lack many survival skills considered essential, including food preservation, tanning, even basic hunting and cooking. However, they are exceptionally adept at war and taking by force, alienating them from other inhabitants of the wasteland,[3] especially tribes in regions around the Great Salt Lake near the ruins of Salt Lake City, where their primary camps are normally located.[1] They have been particularly bitter enemies with New Canaan for decades, fighting them for supplies and territory.[4]

They were usually kept at bay thanks to New Canaanites and the Desert Rangers, until the latter were absorbed into the NCR in 2271. By 2277, the Rangers were completely integrated into the NCR Rangers and abandoned frontier outposts. The emboldened White Legs, normally raiding northeast of Caliente, pounced on the I-15 and traffic passing through it northwards. The situation got so bad that the route was entirely abandoned, culminating in the destruction of bridges over Virgin River that sealed that region as White Legs' territory.[5]

The increased territory and numbers presented a problem, as the White Legs found themselves unable to sustain themselves through just raiding. Unable to develop skills that would allow them to settle and unable to take cities with their primitive arsenals and skills, the White Legs were poised to die out within a generation, imploding as a result of their success.[6] That is when the Legion's emissary, Ulysses, arrived. In return for the destruction of New Canaan and the death of all of its inhabitants, the White Legs would be inducted into the Legion. Caesar could not care less. New Canaan was just collateral damage, of course. Their real goal was the assassination of Joshua Graham.[7] Under Ulysses, the White Legs learned new combat skills and gained new weapons, recovered from Old World and New Canaan caches. Thus strengthened, the White Legs started raids throughout former Utah and parts of Nevada for Caesar's Legion, killing all who they came across.[5]

They managed to sack New Canaan in 2281. They waited until Graham and the bulk of the city's defenders were away, before attacking under cover of night.[8] Under Ulysses' leadership, the White Legs blitzed the city, before its denizens could mount an effective defense.[7][9] Few managed to flee the city into the surrounding countryside. The White Legs killed all without mercy, including the elderly, ill and children. Anyone who didn't get away fast enough.[10] The city was then set on fire, to prevent anyone from returning. Those trapped in buildings were burned alive, including Bishop Mordecai.[11] The ruins were then salted, to ensure nothing could grow there again.[12]

The White Legs then pursued the refugees into Zion, to finish them off and gain their place at Caesar's side. Little did they suspect that Graham would be a tough nut to crack, as would the Courier, coming into the canyon with a Happy Trails caravan.[8]

The White Legs are a raider tribe that revels in destruction. Accordingly, they boast a barbaric lifestyle based off of strength and combat acuity. Everything they have has been acquired either by picking through ruins of the Old World or raiding more capable wastelanders. Their leaders are chosen on the basis of their prowess and savagery. Salt-Upon-Wounds, their chief, was reputed to have slain a hundred men with his power fist, achieving his position. However, this form of leadership is notoriously unreliable and cannot prevent a rout by superior forces.[3]

White Legs are superstitious and dislike pre-War buildings, which they consider to be taboo.[13] Superstitions contribute to their strong tribal identity, together with two additional factors. First, they speak a pidgin language, heavily borrowing from various pre-War languages, isolating them from other tribes. Second, while composed primarily of men and women of Caucasian descent, all White Legs cover their bodies in white chalk and identical war paint on their faces, reinforcing their distinct identity. This was also done to help them camouflage in their native territory of the Great Salt Lake (a barren salt pan).[14] The White Legs attack all who do not have their appearance.[15] The dreadlocks worn by the tribesmen are a tribute to Ulysses. By appropriating the hairstyle of a former Twisted Hairs tribesman, they wished to show respect, thanking him for teaching them how to wage war on New Canaan and providing them with new weapons to do so. They only succeeded in tarnishing their legacy.[16]

Examples of words and phrases

White Legs warbands are composed of four different types of warriors, each specializing in a different aspect of combat. Tactically, White Legs warbands heavily rely on ambushes, to deny their targets the ability to form a defense. Hiding behind cover such as trees, rocks and even bushes, they attack when they believe they have the upper hand. These warbands are split into two basic types: ranged and melee units.

White Legs rarely fight alone, usually in pairs or larger groups. This allows them to attack the Courier cooperatively, using a mix of both melee and long-range attacks to deal a large amount of damage.

“They're hateful savages who live only to plunder and destroy.”— Daniel

Due to their hostility, the White Legs have little to no relations with any of the tribes of Zion and attack anyone who isn't one of their own.[15] Any group that works with and is associated with their enemies (namely, the Sorrows and Dead Horses to the New Canaanites) is also in danger of violence.[4] The defeated are routinely scalped for trophies.[5]

Their only alliance is with the Legion. Ulysses manipulated the White Legs into believing that the Legion will provide for them, but in truth, their only purpose is to kill Joshua Graham and destroy New Canaan. Beyond that, the White legs are too primitive to consider integration and should they survive the events in Zion, they are ruthlessly exterminated by the Legion.[17] The modus operandi is similar with other tribes the Legion targeted. Twisted Hairs were also promised integration on favorable terms, in exchange for their talents, only to be assimilated by force, with defiant tribesmen crucified along the I-40. Of course, the Twisted Hairs were pure scavengers, incapable of sustaining themselves.[18]

The White Legs are scavengers and their gear consists of whatever tools the tribe managed to acquire. Their distinct armor is usually a collection of salvaged armored plates coupled with cloth and leather held together by belts and ropes, with any non-combat gear carried on these makeshift harnesses. Their weapons represent an eclectic mix, ranging from simple melee weapons such as tomahawks, through Shishkebabs stolen from talented wastelanders, to jury-rigged weapons like mantis gauntlets. Ranged weapons include a variety of firearms taken from armories and caches. Their signature weapon is the storm drum, a pre-War .45 Auto submachine gun. The bulk of these weapons was taken from an armory near Spanish Fork.[19] All ranged weapons are in invariably poor condition, as the White Legs do not know how to maintain them. What they don't know how to fix, they discard. As a result, their camps resemble large trash heaps, rather than settlements of civilized folk.[20]

Retrieved from "https://fallout.fandom.com/wiki/White_Legs?oldid=3460304"
Community content is available under CC-BY-SA unless otherwise noted.