The crater containing the remains of the White House

The White House is a location in Washington, D.C. in 2277. It used to be the official residence of the president of the United States, and sustained a direct hit from a nuclear bomb during the Great War.

The White House pool underwent renovations in 2042. Several deck chairs were sold to the Whitespring Presidential Cottage as a result of the renovations.[1]

In 2077, the president left the White House and secretly began living on Control Station ENCLAVE, a Poseidon Energy oil rig off the coast of San Francisco.[2] The White House Press Corps was unofficially and unceremoniously disbanded around the same time. By October 2077, the West Wing of the building had been empty for over half a year, with nobody having lived or worked politically there for several months. Only a small crew of manual laborers remained on staff to maintain the property.

During the Great War, the White House suffered a direct hit, and all that is left in its place is remnants of the marble pillars and a giant, highly radioactive crater. The only entities left here are some ferocious glowing ones.

The White House appears only in Fallout 3, and is mentioned in its add-ons Broken Steel and Mothership Zeta.[3] It is also mentioned in Fallout 4[2] and Fallout 76.[1][4][5]

The White House is based on the government building of the same name, located in Washington, D.C. 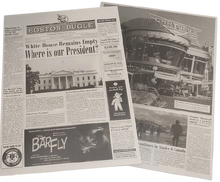 White House seen in Boston Bugle Volume 12, no. 748
Add a photo to this gallery

Retrieved from "https://fallout.fandom.com/wiki/White_House?oldid=3413249"
Community content is available under CC-BY-SA unless otherwise noted.