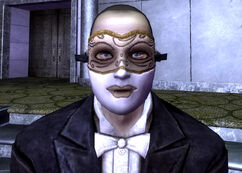 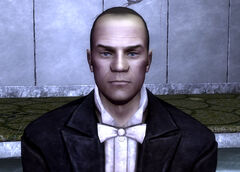 The greeter without his mask

“Beg your pardon, but could I trouble you to turn over your weapons?”

He roams around Ultra-Luxe and greets anyone entering the casino, confiscating their weapons in the process.

He will ask the Courier to hand over any weapons. If he/she agrees, he will confiscate all weapons (excluding holdout weapons). Not giving them to him will result in him becoming hostile.

The White Glove greeter appears only in Fallout: New Vegas.

Retrieved from "https://fallout.fandom.com/wiki/White_Glove_greeter?oldid=3125646"
Community content is available under CC-BY-SA unless otherwise noted.