Fallout: New Vegas
“You see? The White Glove Society remains the very picture of courtesy, even in the face of such impolite accusations. We have nothing to hide here.”— Marjorie

The White Glove Society is one of the Three Families, responsible for the operation and maintenance of the Ultra-Luxe casino on the New Vegas Strip in 2281.

The White Glove Society is a former tribe employed by Robert House to run and maintain the Ultra-Luxe casino and hotel.[1] The tribe signed a contract to turn away from their tribal identity, agreeing not to engage in cannibalism, and in turn, Mr. House agreed not to divulge their tribe's former name.[2][3] Their hotel is an establishment of refinement and its operators change the subject if visitors inquire about their past.[4][5]

The White Glove Society pampers its clients and provides the Strip's most elite casino experience. The dress code is strictly enforced. All staff and family members are well-dressed, well-spoken, and well-behaved. The White Glove Society are headed up by Marjorie[6][7] who also serves as manager of the casino's meat-oriented restaurant, the Gourmand. Mortimer serves as the hotel manager and works the front desk of the Ultra-Luxe.[8]

Mortimer's position in the casino also gives him the responsibility of finding suitable candidates within the hotel and casino to abduct, provided the White Glove Society is brought back to cannibalism. Philippe is The Gourmand's chef and creator of the Ultra-Luxe's infamous steaks. Succulent and delicious, a variety of meats are available, but only to the most discerning (and sponsored) Society member.[Non-canon 1]

The White Glove Society sees itself above the common people of the Mojave Wasteland. They claim to eat only the finest foods and wear the best clothing available in the wasteland. They do not allow just anyone to join them, in order to join the White Glove Society, one must have a notable member to sponsor them. They are also allegedly the ones who control the food supply of the Strip.[9]

Some of the White Gloves now wish to return to cannibalism by abducting healthy, well-fed individuals. When one of these individuals escapes, they abduct Heck Gunderson's son Ted Gunderson as an alternative. This abduction starts the quest Beyond the Beef. If the player sided with the Legion, they can recruit the White Glove Society to fight with the player in the final battle by speaking to Marjorie, but they offer no support at Hoover Dam.

Upon finishing Beyond the Beef, Mortimer may have no more commentary. However, a quest note will repeatedly pop up saying to speak to Mortimer for more info on the White Glove Society, which cannot be accomplished, unless he is resurrected and then talked to via console.[verified] 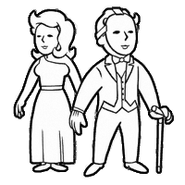