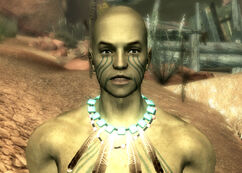 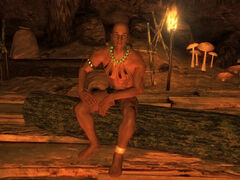 White Bird in his cave

White Bird is a tribal shaman living in The Narrows in Zion Canyon in 2281.

White Bird is the Shaman of the Sorrows tribe in Zion. Not much is known of him, except that he has an expansive knowledge in tribal medicine and holds a place of authority in the tribe, as new tribe members must go to him to complete their rite of passage. He is not a very vocal man, and often does not have much to say. White Bird lives in his own cave at the Sorrows camp.

Upon completion of Crush the White Legs or Flight from Zion White Bird will no longer be found in his cave.

Retrieved from "https://fallout.fandom.com/wiki/White_Bird?oldid=3389097"
Community content is available under CC-BY-SA unless otherwise noted.