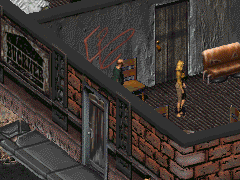 “With a nickname like yours, Whiskey Bob, maybe you should be providing the drinks.”— Chosen One

Whiskey Bob is a moonshiner in Klamath in 2241.

An old man with a scrawny beard and a red nose,[1] old Bob is a regular of the Buckner House. He makes a living by making booze in his still in the grazing grounds south of downtown and selling it to the town denizens. He possesses a good deal of information about Klamath and its denizens, making him a good source of leads for any tribal on his path to glory.

Refuel the still: When offered a drink (or convinced to buy you a drink instead following a Speech check), he will give the Chosen One a quest to fuel up his still that is hidden in the woods. The pay is initially $50, but, with a Barter check it can be raised to $65.

Whiskey Bob appears only in Fallout 2.

Bob describes the Den as a "hive of scum and villainy," which is a reference to Star Wars Episode IV: A New Hope, in which Obi-Wan Kenobi uses the same words to describe Mos Eisley.

Retrieved from "https://fallout.fandom.com/wiki/Whiskey_Bob?oldid=3277327"
Community content is available under CC-BY-SA unless otherwise noted.