Whiskey is a consumable item in Fallout: New Vegas. It increases Charisma and Strength and reduces Intelligence by 1.

A common brand of whiskey in the region post-War was produced by Olde Royale. As with any food item in Fallout: New Vegas, whiskey's positive and negative effects are altered by the player character's Survival skill, including the DT increase provided by the Whiskey Rose perk. With a Survival skill of 100 the player character will receive +3 to Charisma and Strength, and -3 to Intelligence, as well as +6 to Damage Threshold if they have the Whiskey Rose perk.

In Hardcore mode, whiskey will increase the one's level of Dehydration. This effect is also affected by the Survival skill, going from +25 at lower levels to +75 with a 100 Survival skill. Whiskey is used in making Party Time Mentats at campfires.

Whiskey Rose is a perk provided while Cass is serving as a companion in the player character's party. With this perk, the penalty to Intelligence for consuming any type of alcohol is eliminated, as are the effects of alcohol addiction. However, the perk provides an additional bonus when consuming whiskey, providing a temporary 2-6 point increase (based on Survival skill level) to the player character's Damage Threshold. 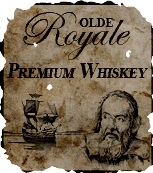