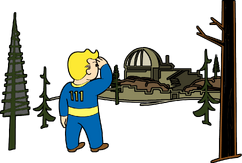 Complete Where You Belong

“Kasumi is here. She's safe and unharmed, and you're free to see her, if you'd like. Before you do, though, tell me: Do you think Kasumi is a synth?”— DiMA

Where You Belong is a main quest and achievement/trophy in the Fallout 4 add-on Far Harbor.

Old Longfellow leads the Sole Survivor to Acadia and gives them a reward. The Sole Survivor enters the settlement, where its leader, an old synth by the name of DiMA, greets the player character and informs them that Kasumi is indeed there.

If Nick Valentine is brought along as a companion, it is revealed that DiMA and Nick are technically "brothers," as they were the first two prototypes of the Institute's attempts to give a machine free will and thought. DiMA explains that he was the one who freed Nick from the Institute, though having done so over a century ago, Nick's memory of the event had worn away, though DiMA bears no regret for this.

The Sole Survivor is directed to Kasumi's location in the basement of the settlement and is extended an invitation to explore the colony, and meet the fellow founders, Faraday and Chase; thus beginning the Acadian Ideals quest.

Upon traveling to the basement, Kasumi affirms her belief that she is a synth, though the Sole Survivor may try to change her mind. She then confesses that she also believes there's a secret behind Acadia, and presents three options for finding it out: talking to DiMA, hacking Faraday's terminal, or eavesdropping on their meeting by hiding in a storage closet. Choosing any of the methods result in the truth being revealed: DiMA gave an old nuclear submarine to the Children of Atom as a home base, now known as "The Nucleus." If one decides to talk to DiMA, a speech check will need to be passed.

The vessel is also where DiMA stored his old memory files, putting the two factions (the Children of Atom and the Harbormen) on the brink of war if they're discovered. Now, the only options are to either talk to DiMA or steal the program from Faraday's desk, in the room to the right of the main chamber. Taking the program takes the player character back to Kasumi, who speculates that DiMA may know more, but leaves it up to the player character to figure that out, ending the quest and starting the quest Best Left Forgotten.

Retrieved from "https://fallout.fandom.com/wiki/Where_You_Belong?oldid=3461537"
Community content is available under CC-BY-SA unless otherwise noted.