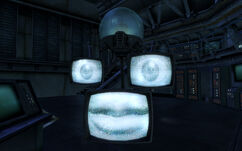 “SUFFICE TO SAY, THOSE VISITORS ARE UNWELCOME. THEY STOLE A GREAT MANY SECRETS AND MUCH TECHNOLOGY. IMPERTINENT. THEY ALSO BROKE ONE OF MY TRAINS.”— Doctor Klein

When Visitors Attack! is a side quest in the Fallout: New Vegas add-on, Old World Blues.

Ask Dr. Klein about previous visitors to the Big MT. He will say that a visitor attacked Dr. 0 and Dr. 8, hacked Dr. 8 and destroyed his voice chip. He then escaped from the Big MT, but not before taking control of the trains in the Big MT, and crashing them to make his exit, effectively blocking off the Big MT east tunnel.

Asking Dr. 0 about the attack, and his part in trying to defend Big MT to finish the quest. He initially tells the Courier that he prefers not to talk about it. However he may be persuaded to tell of when Elijah tried to take over Little Yangtze, 0 and the other doctors sent robots after him. However, Elijah, using his "suped up laser gun" made quick work of the robots. When he then proceeded to try and hack into the Big MT mainframe, 8 tried to stop him, but only got a fried voice module for his efforts. Elijah then rerouted 0's processors to take control of the train network. Amidst the confusion, he punched a hole through one of the train tunnels and escaped.

The wrecked trains and blockage of the tunnel.
Add a photo to this gallery
Retrieved from "https://fallout.fandom.com/wiki/When_Visitors_Attack!?oldid=3415952"
Community content is available under CC-BY-SA unless otherwise noted.