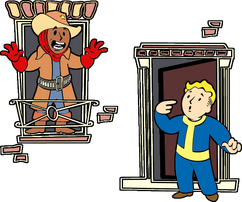 “I've got a group of settlers inside! The Raiders are almost through the door! Grab that Laser Musket and help us! Please!”— Preston Garvey

When Freedom Calls is a Minutemen main quest and achievement/trophy in Fallout 4.

During travels through Concord, the Sole Survivor will spot a man protecting a group of people from raider attacks on a balcony of the Museum of Freedom. By the doors below the balcony is a short laser musket and some fusion cells for the taking. Clear any foes from the streets before entering the Museum.

If at least one perk point has been dedicated to Locksmith, the Sole Survivor can unlock the door ahead, which uses an Advanced lock. Otherwise, head through the door to the right and begin battling through the raiders, making way upstairs. Take the opportunity to get armor and weapons from the raiders before heading to the second floor. Once all the raiders are dead, the door to the room where the settlers are will open. Go inside and speak to Preston Garvey, one of the last survivors of the Commonwealth Minutemen.

While here, be sure to pick up the Perception bobblehead and the RobCo Fun magazine, containing the Atomic Command holotape. Agree to help them crush any remaining raider opposition in town. Make sure to talk to Mama Murphy, as this is one of the rare opportunities to learn Dogmeat's name if he is accompanying the player character in this quest. Passing a moderately-difficult Charisma check will get Mama Murphy to speak of something very dangerous that will rear its ugly head during the coming battle. Failing this check will only get response, "it ain't a Raider."

Drop to the ground floor and into the basement. To unlock the door, one can choose to either hack the terminal or directly pick the lock; both are of novice difficulty. Once the door is open, grab the fusion core inside.

Head upstairs and onto the roof to find a suit of T-45 power armor. Insert the fusion core into the power armor and climb inside the suit. Next, take the minigun from the Vertibird. One can either remain on the roof for more protection or jump off it into the fray. Do not worry about taking fall damage as the power armor will negate it. Begin killing the raiders; once Gristle—the only named raider—is dead, be sure to pick up the Corvega storage key from his body. After killing a number of raiders, a deathclaw will burst out of the sewer near the intersection and enter the fray. Although it looks menacing, the power armor and minigun should prove helpful in ending it.

Once all of the enemies are dead, re-enter the Museum of Freedom and speak to Preston Garvey. Mama Murphy will speak to the Sole Survivor about their destiny and their son, directing them to Diamond City. This will initiate the next quest of the main storyline, Jewel of the Commonwealth. Once that is done, one can either part ways with Preston here and seek the city out, or accompany him and the settlers to Sanctuary Hills. Talking to Preston once in Sanctuary will end this quest and begin the next quest for the Minutemen, The First Step.

Retrieved from "https://fallout.fandom.com/wiki/When_Freedom_Calls?oldid=3118030"
Community content is available under CC-BY-SA unless otherwise noted.