Wheaton armory is a pre-War military armory in the Capital Wasteland in 2277.

Located in what used to be Wheaton, Maryland, which is east of the Scrapyard, the armory consists of an underground bunker and a bombed-out office building across from it. A number of raiders have occupied the building and the armory compound, including a raider armed with a missile launcher. The ruined office building has four stories. The second story can be accessed by climbing a slab of concrete and there are stairs to the third and fourth stories.

The bunker's entrance leads to a small room filled with radiation, ranging from 1-2 rads per second. It then opens to a silo room that allows the Lone Wanderer to go down through three floors. The bottom floor is a hatch for a missile launch. The missile's payload must have been damaged in some way, thereby flooding the area with radiation. A nearby bomb explosion may have caused this damage, evident by the appearance of the office building. At the bottom of the stairwell, there is a turret guarding the armory. The armory door is locked with a Very Hard lock, or the door terminal can be hacked with a Science skill of 100. Other than the armory, a radio, a few lockers, and some old computing equipment can be found in the bunker.

The Wheaton armory appears only in Fallout 3.

A visual glitch may occur when attempting to hack the "Very Hard" locked door at the bottom of the bunker. If your 'Pip-Boy Color' in the Display menu of Settings is set to 'Green' there is a chance that the hacking menu will be colored white and the "Unlock Door" menu will have preset text set as green, while the option to "Unlock Door" will be colored white. [verified] 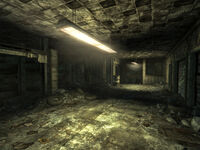 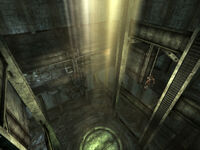 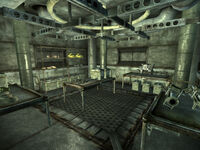 The Very Hard locked room with plenty of ammo

GECK render from above 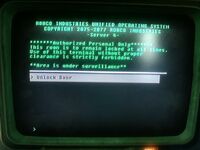