Whales are creatures found in the Commonwealth and on the Island in 2287.

The creature is always found deceased along waterway coasts, sometimes with innards exposed. Others are on the decks of boats or found being fed upon by mirelurks. Some whale corpses will explode if struck.

Whales appear in Fallout 4 and its add-on Far Harbor.

Two whales on the coast near the Museum of Witchcraft

The skeleton of a fisherman protruding from a whales 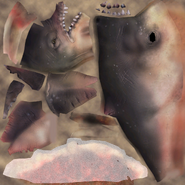