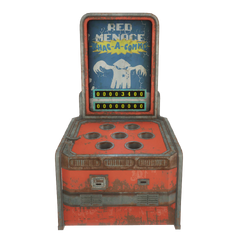 Whac-a-Commie is a settlement object and arcade game in the Fallout 4 add-on Nuka-World.

The Whac-a-Commie machine resembles the real-life arcade game Whack-a-Mole and requires the player to hit small padded figures as they emerge from holes in the surface of the machine. While the Commie Whacker is the intended weapon for this game, any weapon (including non-melee weapons) can be used as can unarmed attacks. The figures are not targetable in V.A.T.S.

The Whac-a-Commie game features the same characters as the Pip-Boy game Red Menace.

Fallout 4 loading screen slide
Add an image to this gallery

Retrieved from "https://fallout.fandom.com/wiki/Whac-a-Commie?oldid=2954434"
Community content is available under CC-BY-SA unless otherwise noted.