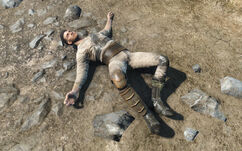 Weylan was a Pack raider in Nuka-world in 2287.

He can be found dead along with multiple other Pack members in the random encounter Dead Pack + Deathclaw. On his body, there is a holotape named "The Test" in which he describes how he will become the new Pack Alpha after bringing the head of a deathclaw to Mason.

Weylan appears only in Fallout 4.

Retrieved from "https://fallout.fandom.com/wiki/Weylan?oldid=3243901"
Community content is available under CC-BY-SA unless otherwise noted.