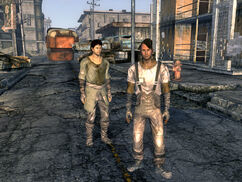 Westside residents and Westside citizens are the inhabitants of Westside in 2281. They are not hostile though a few of them will defend themselves if attacked.

Though they live in one of the poorer residential areas of the city, Westside residents have their own militia and, unlike any other people in New Vegas, have become more or less self-dependent, growing their own food and maintaining their own water supply.

The residents often complain of problems with the Fiends, who often harass and even kill them in constant raids. A smaller gang, the Scorpions, also have a presence around the southern outskirts.

Westside residents and citizens appear only in Fallout: New Vegas.

Retrieved from "https://fallout.fandom.com/wiki/Westside_resident?oldid=3107819"
Community content is available under CC-BY-SA unless otherwise noted.