Fallout: New Vegas
“It might not look like much, but it's what keeps us Westside locals independent. We started it a few years ago. I admit, we had a lot of trouble at first, but eventually we got some help from Tom Anderson with the Followers. We're finally to the point where the co-op members can start making money from sales instead of just breaking even.”— Ettienne

The Westside Co-op is a grocery store in the Mojave Wasteland in 2281. It is located inside Westside and run by an organization of the same name, managed by Clayton Ettienne and Tom Anderson.

Ettienne and the Westside locals established up the Westside Co-op to pool resources and better organize their work towards independence. With help from a member of the Followers of the Apocalypse named Tom Anderson, Westside grew from subsistence farming hamlet to a stable, self-sufficient farming community independent from the NCR. The farmers grow enough crops to feed themselves and to export to outside parties, thus ensuring their self-reliance.

In recent times, Westside has become embroiled in increasingly tense negotiations with the NCR over the siphoning of their water. A part of this scandal involves the murder of an NCR trooper investigating the water shortage.

The organization has refurbished an old Uptown Drugs building to house the heart of their farming operation.[Non-canon 1] Complete with basic refrigeration, the local grocery store makes a profit from the sale of surplus fresh produce on the premises, which is managed by Ettienne. The caps earned from sales are shared between the farmers who grow the food stocked in the store. There is an Average locked safe behind the counter and the player character will incur a Karma loss for picking it.

If Tom Anderson is blackmailed into "sharing" parts of the co-op's profit during the quest The White Wash, the player character will receive 100 to 200 caps when they talk to Ettienne every 24 in-game hours. 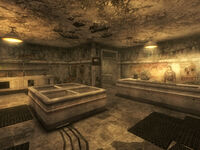