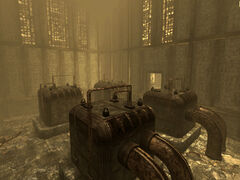 “The pump station is pretty run down, you could go take a look around the place, see if you find anything strange going on. What do you say?”— Morgan Blake

The west pump station is a location in the Mojave Wasteland in 2281. It is located southeast of New Vegas Steel and northwest of the Basincreek building.

This station is a small industrial building with a wrecked red truck rusting in front of it. There is a dumpster to the right of the entrance. It is located inside of Fiend territory and is directly east of Vault 3.

Inside the station, there are two main rooms, including an office and a pump room. There's a pump station terminal on the desk in the office section that controls four pumps. Passing a 50 Science check will restore the network connection of the terminal and will award 50 XP. After fixing the computer, the Courier can see information regarding pumped water being contaminated by radioactive material. There are three Fiends inside the building, including one in the office and two in the pump room.

The west pump station appears only in Fallout: New Vegas.