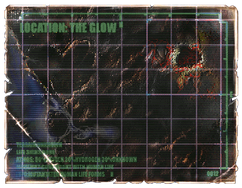 Play sound
Radiation Storm.ogg
“They required me to go on a quest before they would let me in. Thinking it would be a short and easy quest, I agreed and set off for the place they called the Glow. The horror of atomic war was never so obvious to me until then.”— Vault Dweller's memoirs.

The West Tek research facility, colloquially known as The Glow, Great Glow, or the Hot Spot[1] after the Great War and referred to as the Ancient Order by some members of the Brotherhood of Steel,[2] was established in 2055 as the primary biological research installation for West Tek.[3]

West-Tek was divided into two distinct divisions, "Advanced Weapons" and "Biomedical Sciences Research."[4] By 2069 it was the single biggest private contractor of the American government, with its biggest project being the T-51b power armor for use by infantry soldiers on the frontlines. Its second-largest was the Pan-Immunity Virion Project (PVP), later known as the Forced Evolutionary Virus (FEV).

The West Tek Research Facility was constructed in 2055 for biological research, but in 2071, the research facility was secured by a military. Research would continue until late-2076 when the fear of international espionage uncovering the PVP research required a complete relocation to the Mariposa Military Base[5] where experimentation on human subjects would continue. Several other projects were also being pursued, including energy weapons and upgrading existing armor.[3]

The West Tek research facility was destroyed in the nuclear holocaust of 2077. During the Great War the surface of the installation took a direct hit from a nuclear warhead which left a gaping hole exposing the subterranean installation, shattering the FEV containment tanks and releasing the irradiated virus into the atmosphere.

Mutated by radiation, the airborne FEV strain did not have the same mutagenic abilities as its counterpart at Mariposa, but still complicated things for the Master later on. Due to its high radiation, the facility came to be known as the Glow, surrounded by legends among the people of New California.

In 2077, a faction within the soon to be Brotherhood of Steel led by Sergeant Dennis Allen gained strength, and they urged Captain Maxson to let them explore the ruins of the West Tek Research Facility, now called the Glow, for artifacts. Capt. Maxson refused, so Allen and his group split away from the Exodus, taking some technology and weapons with them. Other members of the team included Soto, Jensen and Camarillo. Unfortunately for them, they were killed by security robots and radiation.[6]

The Brotherhood of Steel used to send unwanted applicants to the Glow on a "fool's quest," referring to it by the moniker the "Ancient Order," just to laugh about it later when they ended up dead because of the high amount of radiation in the area. They were quite surprised when one known as the Vault Dweller actually made it back, bringing with them a holodisk that recorded the fate of Allen's expedition, and earning them a place in the Brotherhood.

The Glow, true to its name, is one of the most highly irradiated locations in the Fallout universe. A few moments' exposure is enough to give a lethal dose of rads. Use of Rad-X to boost Radiation Resistance to 100% is widely considered absolutely necessary to survive a trip to the Glow.

Some time after 2162, some ghoul survivors from Necropolis settled northwest of the Glow, and founded the town of Dayglow, whose inhabitants formed partnerships with scavenging companies from New Adytum and the Hub and have built quite a profitable corporation from their salvage efforts.

Little remains on the surface of the Glow, just a gaping crater where once the heart of the American research effort laid. Three charred corpses lie around the crater. The location is extremely irradiated; radiation levels shoot up when one is able to see the giant crater, and it only gets worse afterwards. A rope can be attached to the steel beam in order to enter the facility.

This was where the offices and other administrative sections of the facility were, before the destruction of the building. The atomic bombing obliterated much of the level and scorched what survived. The body of Sergeant Dennis Allen lays in the conference room, encased in a defunct suit of T-51b power armor. On his person was a holodisk which the Vault Dweller used to become an initiate of the Brotherhood of Steel.

The second level of the facility has been affected by the nuclear blast also, yet more survived, such as the security bots of the facility. The exact purpose is unknown (ZAX does not provide a description), but it was likely a section devoted to blueprints and design, as a lot of computers and tables are present. On a burned corpse in the northeast corner, a red pass key can be found, granting access to other levels.

Every base needs a brain, and this level houses the mind of The Glow: ZAX. This supercomputer oversaw all research and development that took place in the base, in addition to performing the routine checks etc. Ever since the nuclear holocaust, he idled, biding his time, frustrated at his inability to perform even the most basic of routines.

In addition, the most advanced research labs in the country were located here, such as physics and biology laboratories, allowing for breakthroughs to happen in science.

The body of Charles Ringhold lies in one of the laser labs, carrying a blue pass key.

The West Tek research facility appears in Fallout, and is mentioned in Fallout 2, Fallout 3,[8] its add-on Operation: Anchorage, and in The Armageddon Rag, Vol. 3.

Delta experiment disk, level 5
Add a photo to this gallery

Retrieved from "https://fallout.fandom.com/wiki/West_Tek_research_facility?oldid=3421955"
Community content is available under CC-BY-SA unless otherwise noted.