Cleansing the Commonwealth
Hypothesis
Leading by Example
A Permanent Solution

West Roxbury station is a location in the Commonwealth in 2287. It is situated east of Fallon's department store, south of Milton General Hospital, and southeast of the Milton parking garage. The entrance is inside the building through the blue doors.

Down the escalator stairs is the entrance area, with a counter to the left and doors to the right. Behind the left counter is a chained door that can be opened from the other side after solving a puzzle on the lower level using buttons and train cars. To the right are two bathrooms. One bathroom behind a Novice-locked door contains a first aid box, while the other has one stall that is booby-trapped. Back to the west and past the counter with the chained door is a hallway that opens into a room containing a chem box, an Expert-locked floor safe, and other loot. Continuing to the north is a set of stairs that lead down to the train platform area.

Down the stairs, ahead to the north is a Novice-locked security gate in front of a button, being the first that should be pressed to solve the puzzle. Unlocking the gate is strictly for the experience points, as the button can be easily accessed through a hole blown in the east wall of the same small room. Returning south, to the left of the stairs is an unlocked door leading to a corridor with a second button. Continuing past the security room to the north is another hallway area containing a cooler and a toolbox, as well as a third button.

Passing through the first train to the central platform between the two trains, another button is behind an unlocked security gate nearby to the north that should be pressed second as part of the puzzle solution. This will allow access to the eastern platform on the far side of the second train, where a Day Tripper can be found on a bench by two skeletons, one of which has a bundle of pre-War money in their hand.

Also on the eastern platform is an Advanced-locked maintenance room door beyond which is a room with an armor workbench, an Expert-locked safe, and a terminal. The corridors to the north and south hold more buttons and minor loot. Tumblers Today issue #3 can be found in an open locker just past the button near the end of the northern corridor, next to a lit candle. The button near the end of the southern corridor should be pressed third.

Return through the second train via the southern corridor to reach a section of the central platform with a forklift, and press the button behind the unlocked security gate to the left. Finally, return through the first train, and travel south between the train and the wall to reach an open door to the right allowing access to a corridor in the southwest corner of the area. After entering the passage, there is an explosives crate to the right behind some concrete blocks. The passage leads south to a locker room, where an adjacent stairway (with a grenade trap activated by a bathroom scale) ascends to a diner with a weapons workbench and a steamer trunk. The chained door leads back out to the upper-level entrance area.

Once down the stairs in the train area:

It is possible to get stuck in one of the tunnels if a companion is commanded to push the button and the player character then boards the train. [verified] 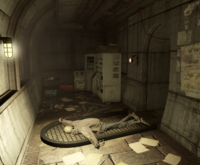 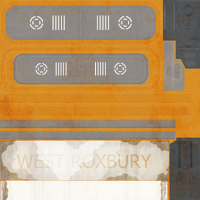